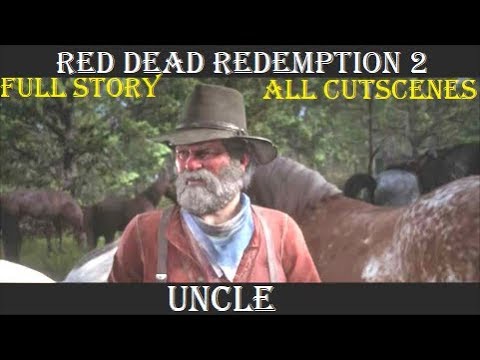 With the addition of the Myths and Mavericks DLC pack, Uncle is also a multiplayer character model that may be selected in the “Revolution” section of the Outfitter.

Uncle was born sometime before 1849 in Ohio and is one of the oldest members of the Van der Linde gang. Uncle was nine years old when both of his parents died, forcing him to move to a new city and “live on his wits” from there on out. He was married at least twice before 1899. Not exactly the most productive gang member, Uncle was a whore-monger and drunkard who was always around when the whiskey was open, but rarely when there is work to be done.

Uncle is an elderly alcoholic and reformed petty thief. Although borderline dysfunctional, Uncle resides with the Marston family and is provided with food and shelter at the family ranch in exchange for work he rarely performs. He sometimes manages to contribute, but to his chagrin, he is often viewed by John as lazy and inept. “Uncle” is a nickname, and he is of no biological relation to any of the Marstons (John qualifies this statement with “at least I sincerely hope not.”).

Uncle, in his own way, can be viewed as seeking redemption from his life of petty crime by working on the Marston ranch. This parallels the decisions of John and Abigail to leave the Van der Linde gang and live a normal life.